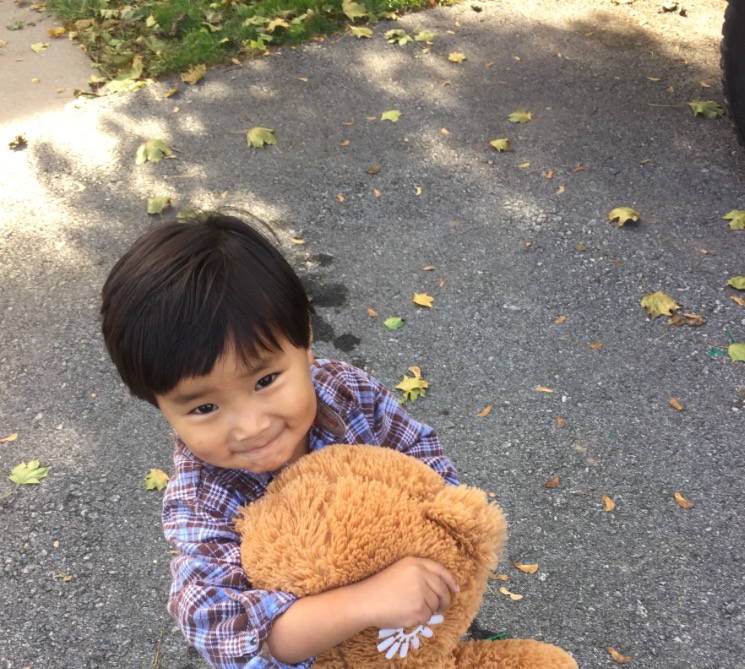 From a seemingly distant call to fruition in 17 days.

So there we were- this Woods Family of 5 waiting and waiting and waiting. We now knew the door was closed to adopting the kids next door, BUT our hearts beat for orphans and kids in distress nonetheless. We wanted to be an adoptive family- we wanted to make a difference in the orphan epidemic. We had been approved to adopt since late July of 2014 and yet nothing. So did we come all this way in the foster-to-adopt program to just have sit here and wait? Did we not hear God correctly? Is our calling really to adopt? These thoughts and questions were regularly circulating in our minds and conversations until suddenly they weren’t…

In the still quiet moments of the morning of October 31, 2014 I received an email about a little boy who needed a home, and even more than that he needed a forever family. He needed a mom and dad who would love him no matter what. He needed to be given the opportunity to learn and grow in an environment where he would be accepted the way he was. And he needed this fast! This little boy’s name was “Zander” kinda cool, right? Of course, that wasn’t really his name it was a pseudonym to protect his real identity until he was matched with a family.

Zander’s story read like any tragic Shakespearean play, except it wasn’t a play, it was the real life of a real little boy.

Zander was born in China and found abandoned in a street crossing with no belongings on August 22, 2012. He was taken by the police to a nearby children’s welfare institute. Upon admission he was named Zhao (last name) Bao Long (first name) and it was determined that he looked to be around 1 month old, so his birth date was estimated to be July 22, 2012. No information is known about the pregnancy, labor, delivery, birth place or birth parents. No information has been found regarding birth family. Cheer up, Bao Long!

He lived in the child welfare institution until the age of 18 months and at that time he was adopted by his first family, given a new name and brought to live in “The States.” He lived with his first family a total of 11 months and during those 11 months Zander’s parents could not bond with him due to many reasons, very few having anything to do with him. On October 1, 2014 his first adoptive parents made the excruciatingly, painful decision to dissolve their adoption of Zander. Zander was described by his first family as: unhappy, discontent, unable to form attachment, and non-verbal. Cheer up, Zander!

As I was reading over Zander’s situation letter that Halloween morning, I remember my pulse quickening and my breathe catching in my throat. The words in this little 2 year-old boy’s story were leaping off the pages right into my heart. I was drawn to him like a magnet is drawn to a piece of iron. I emailed a friend, who was also involved in her own foster-to-adopt process, that I felt a “pull” towards him. My husband didn’t immediately feel the same pull to him; Zander was possibly autistic and for sure, significantly delayed in many areas and was in need of Occupational, Physical, and Speech therapy. We had 3 children already and knew our plate was full but where does that leave Zander? Zander needed a home and I told my husband that “no” was a fine answer if it was the Lord saying “no” and not us. He prayed about it and by the next day we were pursuing more information about Zander. After many conversations with specialist and case workers we decided to move forward with seeing if we would be a “match” for Zander. The matching meeting was to take place on November 7th and we were 1 of 20 families looking to see if Zander was to be their child. The waiting during this time was full of excitement and fear. Excitement for what might be and fear for what might be. At times I would be gripped so tightly with panic and anxiety that I could not stand and had to lie down. I rarely slept during this time because the Lord would get me up at all hours to have me pour over scripture and get prepared for what was coming. Walking into a calling, any calling, is a serious step… you are stepping out into unknown territory and need to be grounded in the Lord, in scripture, in His presence.  The Lord knew I had to fill my spiritual tank to the tippy top because He knew we were we going to be Zander’s parents.

It was a unanimous decision, and the professionals who make these tough calls on matching kids with families, all agreed that Zander was meant to be ours. Now we would learn his name and waiting for his case worker to say it felt like a thousand years! It’s really bizarre to say, “Yes” to a child and not even know his name!

His name is Zion.

Of course it is. This is God’s child and of course he would bare the name of Zion: city where the Lord dwells or city of God. At first I was taken aback by the name just because it wasn’t a name I had ever thought of for one of my children. I wanted to change his name but my husband was adamant that we not, because this child had lost enough, at least let him keep his name. I prayed about it and in the early, hazy moments of dawn the following day the Lord told me this, “Zion is his name. I have given him this name and it will be part of his testimony.” How could I argue with that?!

So a quick 9 days later, with the help of lots of family and friends, we had prepared for the coming home of Zion on November 17th.

After what had felt like a very, very long time waiting to see if the Lord’s call on our life was adoption, we now knew! In the days spent preparing, I, and many friends and family, scavenged over every verse that had the word Zion in it. I wanted to learn what the Lord said about Zion, my son. I knew very little of this child, other than some pretty scary information that would make anyone question what they were doing. So I had to put myself in a mindset of knowing that God, in all His sovereignty, chose us to be the family of Zion. We picked up Zion on a cold and cloudy Monday, and became the Woods Family of 6. We will be forever grateful for his first family; they went across the world into a foreign land to bring home our son. Cheer up, Zion!

On that day the announcement to Jerusalem will be, “Cheer up, Zion! Don’t be afraid! For the Lord your God is living among you. He is a Mighty Savior. He will take delight in you with gladness. With his love, He will calm all your fears. He will rejoice over you with joyful songs.” Zephaniah 3:16-17

This experience lead to a greater RELIANCE on God’s sovereign hand to not only direct my path but to also steady me once upon it.